Search
Pavilion - Collaboration with Karen Daniela Bello Rozo 2018
Habitable pavilion. Mild steel and canvas 380 x 248 x 233 cm
​During the first term of my Studio Practice, I started developing a piece called Memoryhouse, which involved working with overlapping projections of a number of photographs that represented memories. I was interested in the way that the audience would engage with the piece and designed an installation that involved a booth, similar to a photo booth, into which the viewer would walk, sit and watch a video generated by the projections.

Digital sketches for the design of Memoryhouse. 2017. 2048 x 2732 pixels.
At the time I had toyed with the idea of building a large pavilion, inside of which the images / video would be experienced, but due to the complexity of its construction and time pressures around assessment I decided to put this on hold.

After presenting a talk about this work to the 3rd year Photography students I was approached by one of them, Karen Daniela Bello Rozo to see if we could work together to build a pavilion that would allow the viewer to experience her photographs in a similar way.

She knew which images she wanted to use in this work but didn’t know how to build a space that would allow two or three people to step inside and so we agreed to collaborate together in creating the piece. My role would be to design and build the structure that would generate the space and then she would cover it with a fabric that would allow images to be projected from outside the pavilion by several projectors, so that they could merge on the surface of the fabric to be experienced by the audience from inside the space.

I worked from models on a scale of 1 : 20 to develop the shape and size that the piece would have and then created the final structure using 10mm mild steel rods. Originally I intended to work with templates of the triangular pieces that comprised the structure, drawing them with chalk on the floor of the workshop and then bending the bars to the shapes of the templates with the blowtorch and welding the triangles only on one of the corners. Due to the size of the triangles though this was not practical so I finally decided to cut all the bars to measure and welded the triangles on all three corners. 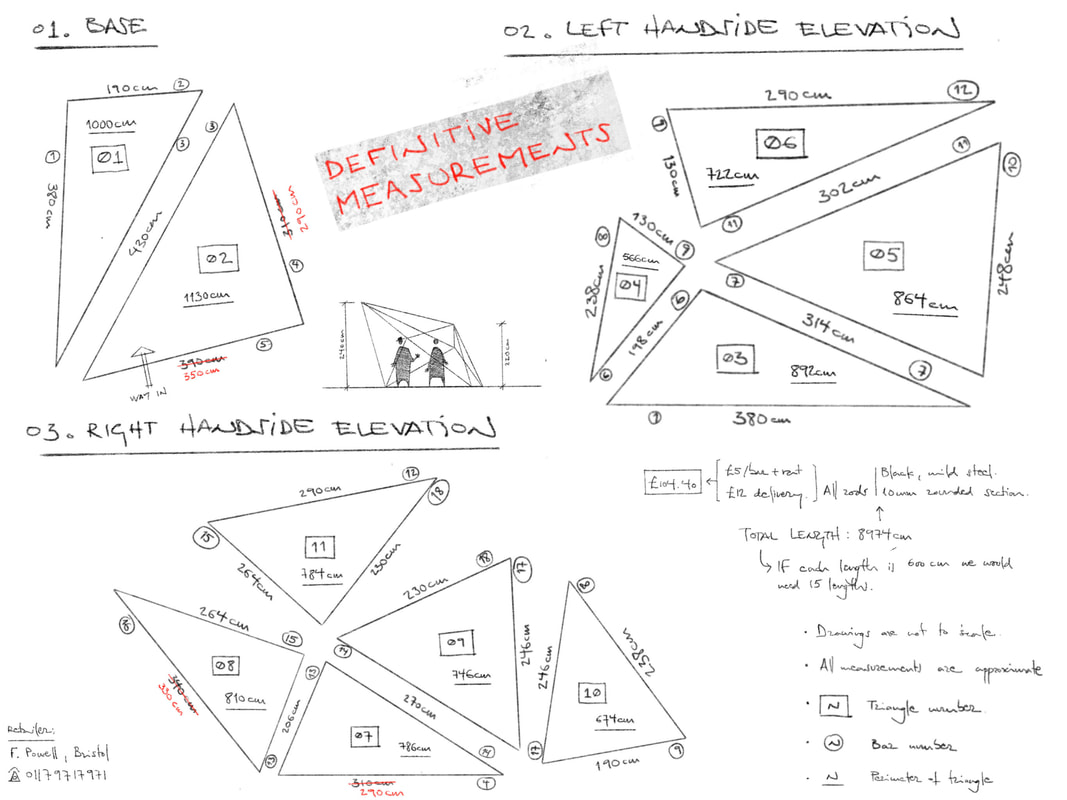 Putting together the individual triangles to create the structure was not an easy task. I was hoping that between two people we would be able to build it in about two hours. I was wrong! We needed three people and it took around 4 hours…

The pavilion was put together inside the largest of the lighting studios ready for Karen’s Degree Show and Karen has had positive feedback on the work from her tutors. I may continue to work with the metal structure I created in the future, modifying it to suit my own practice.

Pavilion as installed in the 2018 degree show at Bath School of Art.